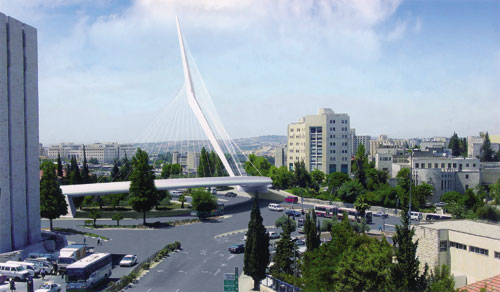 One of our very first projects was the Chords Bridge in Jerusalem.

I met with Baruch Gover, the project manager, in his room. He looked at me with a smile, “Schedule? Look, this project is not that complicated… It’s concrete and steel. The concrete – the end columns – are not critical. The steel – the pilon and all of the chords – the steel is ‘super critical’.”

The municipal development company hired our services to analyze the schedule and assist in understanding the important aspects of such complicated project. The project schedule was a combination of the schedules of two contractors who cooperated in this project – a steel manufacturer and a concrete construction company. The final schedule had over 1,500 activities.

The Light Rail Bridge, 380 meters long and weighing 4,500 tons, is made of steel and concrete, designed by the internationally renowned architect Santiago Calatrava. It cost USD 65 million to build and is composed of 66 cables, 150 meters each, hanging from a pilon standing 119 meters tall.

Answer: Today we have HCP Go, HCP’s Project addon. With one click, you can analyze your schedule file – and get a free report with your results!

How do I test a schedule with 1,500 activities?

With the help of the HCP (Hidden Critical Paths) analysis (For information on the method, what to use it for and how you can do it yourself, click here), it appeared that Baruch, the project manager, was right: the steel parts are definitely critical to the schedule. However, the HCP analysis revealed a surprise: some concrete activities took place on hidden critical paths with a slack time of only nine days!

Between you and me? I didn’t know what to do with these findings. My concern was that I’m presenting a tough situation with no solution. In contrast to me, Baruch saw the data in a different light. He called a meeting with all parties involved – representatives of the two contractors, the contractors’ schedule consultant, other advisers, the management team and representatives of the client, and led a process of configuring project changes: the concrete components were changed, the priority was changed and other activities were changed. The process ended with the contractor generating a new schedule.

Is that it? Are we done?

Now we need to run an HCP analysis on the new schedule, obviously! 🙂

The analysis of the new schedule revealed that steel was still critical, but the most important concrete activities had a longer time gap, two months instead of under two weeks. When I brought the analysis results to Baruch – he was pleased. It was his vision for the project!

And what happened later? A lot of things happened. There were a lot of unexpected things in the concrete activities. The gap created in the second schedule allowed concrete activities to be delayed – but they did not enter the critical path. Had they continued according to the first schedule – they would have become critical.

For more information about the implications of managing and building a work plan for a project see – Project work plan and schedule.

Want to add or ask something?
With pleasure! You can do so here in the comments.
Want to tell me something? Mention it at the beginning of the comment and it won’t be published.

Friday – to Work or not to Work – That is the Question…

Building a work plan for project