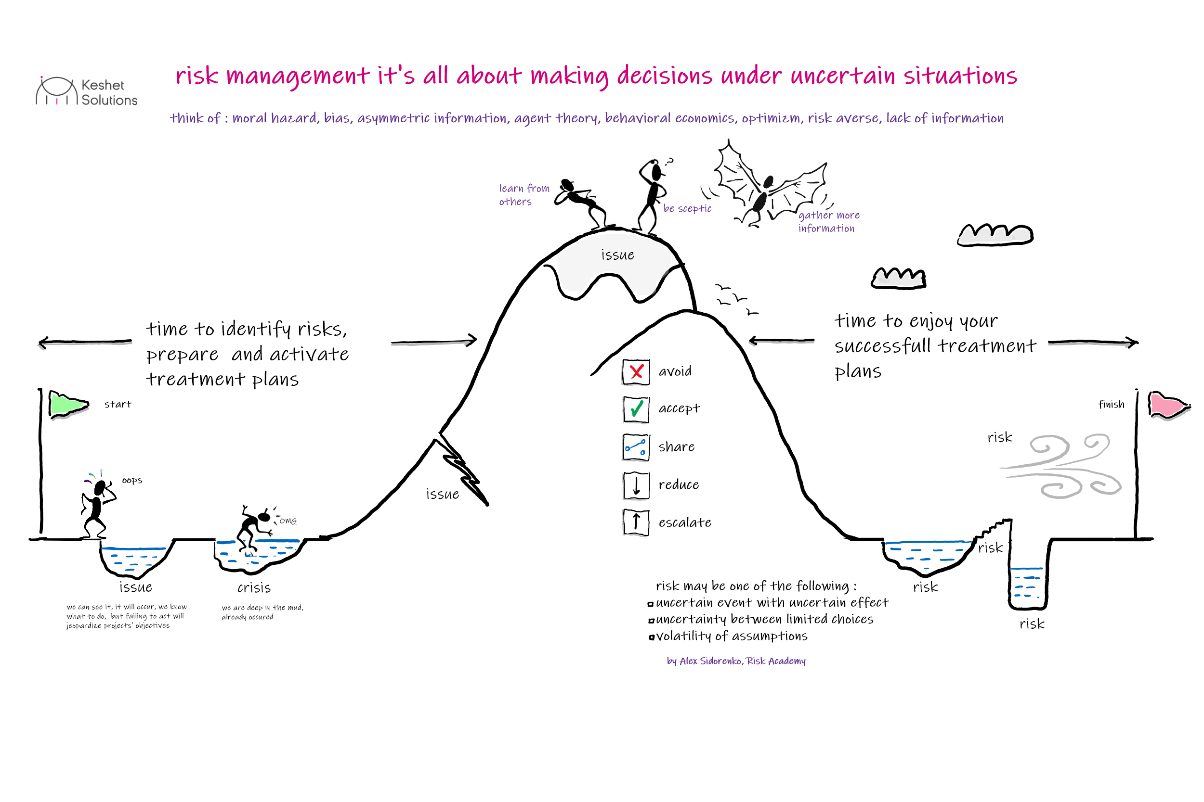 As part of the forum which Tal Levanon, a professional colleague, has provided me, I have decided to pose a question which, I hope, will stimulate those dealing in risk management to devote some thought to the following fundamental issue: what constitutes a risk to an engineering project?
To all appearances, this is a simple question: a risk is the effect of uncertainty on the project goals (as defined in International Standard ISO31000).

The book entitled The Failure of Risk Management, a second edition of which was published in 2020 (Douglas W. Hubbard), deals with the variety of issues of failure in the classic risk management: the tables, the matrices, the risk surveys – why do all these actually fail in helping projects to succeed and even become counterproductive. Hubbard offers alternatives for understanding the nature of the risk like for example, “potential loss, disaster, or undesirable events which are measured by the likelihood attributed to the events and the scope of their impact” or simply put, “the possibility that something bad will happen“.

Let’s try to gain a deeper understanding of the issue of uncertainty. Here too, the range of possibilities the Web and the dictionaries offer is quite dazzling (even the English term Uncertainty is subject to broad interpretation), but in all likelihood the uncertainty can be associated with a state of “lack of information and/or knowledge which prevent predicting the future”.

Lack of information or lack of knowledge – what’s the difference?

The lack of information is distinct from lack of knowledge. Lack of information means lack of data, facts, figures, measurements, while a lack of knowledge, on the other hand, is the absence (or lack) of professional, individual, or group capability to analyze the data and the facts, to build forecasts and analyze them, to evaluate various scenarios, and perhaps even inability arising from the biasing of the facts (in other words information is available but it is biased, asymmetrical, unbalanced- but more about this in a separate post).

What is the difference between an Issue and a Risk?

The following diagram is an attempt to describe the difference between a Risk and an Issue: 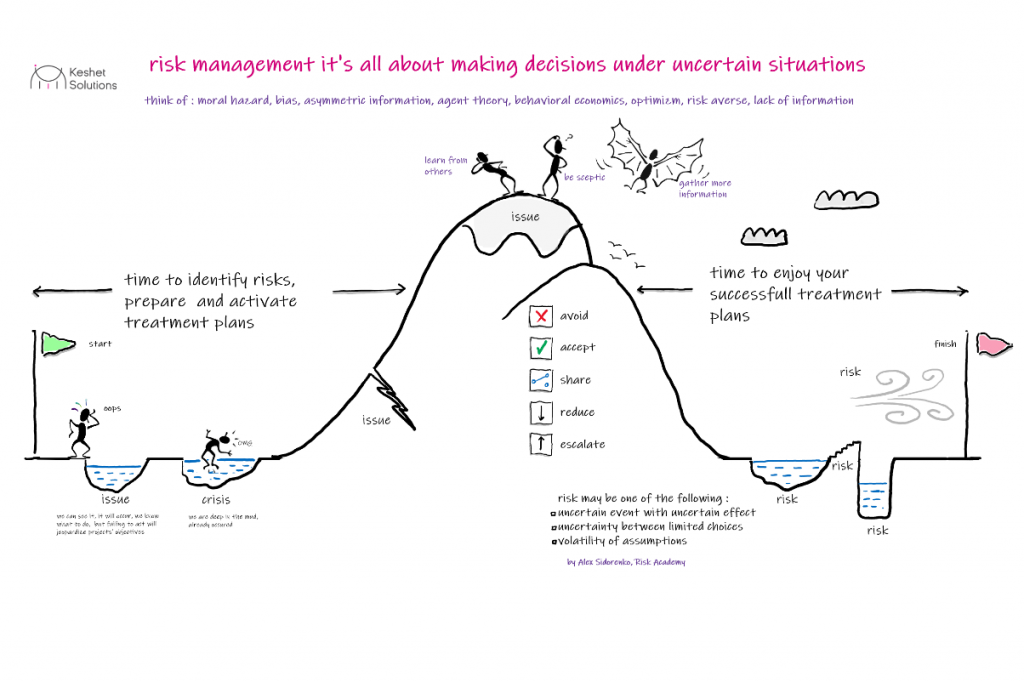 The Issue is a situation described at a relatively high level, with a large amount of information, and a high likelihood that we are professionally capable of dealing with the issue, and yes – this could get complicated, just as any other known action. The water may be colder or deeper than what we knew or measured, but this is still within reason, can be dealt with relatively quickly within ordinary management practices, and there is no need to deal with a sizable, unpredictable uncertainty.

The Risk is an unpredictable future situation, or which is very difficult to predict in the absence of sufficient information or knowledge. It is beyond the mountain, over the horizon, sometimes even intangible and – most importantly – it is not a trivial part of the project, not the everyday routine work that might get disrupted.

An activity that might be disrupted is an Issue, which is handled through management routines, work plans, timetables, method statements.

Here are some examples of risks (significant uncertainties) versus issues – reasonable uncertainty:

Answer: Today we have HCP-Go, HCP’s Project SaaS. With one click, you can analyze your schedule file – and get a free report with your results!

The importance of distinguishing between an Issue and a Risk

Project managers and decision-makers will embrace risk management only if it becomes a tool that helps them directly in managing the project and in making decisions under conditions of uncertainty.

Issues management becomes just another time-consuming chore, consuming double the time, and in the end the risk management is abandoned in desperation and frustration over the loss of valuable time. This valuable time could have been saved by continually dealing with piecing out the complicated, invisible, unknown future, in order that when the day comes and we reach it, we arrive prepared with informed decisions being made.

Why is it important to manage uncertainty?

Uncertainty is not a mishap, a disaster or a sin – it is always with us, it’s part of our lives. But not every little issue in the everyday practicalities is an uncertainty. We don’t manage risks in a structured process like driving on a familiar road inside the country under familiar conditions. There is no reason to waste precious time on that. There is, however, good reason to manage uncertainties on a winding road in a foreign country, unknown to us, which we have never traveled on before, and where it is likely that we will:

All these cause uncertainty which will affect us when we have to catch the flight back home, to the hotel or to the planned meeting.

At the end of the day, the main mission of risk management is the coping with significant uncertainty in the decision-making processes. Not the kind that is expected, known, familiar, repetitive and can be dealt with, but rather the kind that is unfamiliar to us, that will surprise us when we least expect it, that we have difficulty acquiring knowledge about and which we cannot prepare for in advance.

Be diverting risk management into the comfort zone of issues management (involving a measure of uncertainty) results, in most cases, in valuable management time being wasted, inefficiency, repetition of things which are in any case being dealt with in other forums. The goal of risk management is to support and assist senior managers when they come to make decisions under conditions of uncertainty.

And what’s in the next posts? About bias and its impact on risk management and project management in general, and about the various ways in which risks can be managed in such a way that they will support the project manager and the decision-making processes.

Want to add or ask something?
With pleasure! You can do so here in the comments.
Want to tell me something? Mention it at the beginning of the comment and it won’t be published